This software has been developed to be used with the Thermo Scientific Proteome Discoverer software, versions 1.3.x, 1.4.x, 2.1.x and 2.3.x. It adds a new node that can be incorporated into the workflow allowing the execution of the following two MS2-spectrum preprocessing steps:

Deisotoping of isotopic clusters
The spectra are searched for isotopic clusters by determining the distances in m/z values between pairs of peaks. For every cluster that is detected, only the monoisotopic peaks remains in the spectrum, the others peaks are removed from it. If deisotoping should be applied to the reporter ion region (ions below 132 Da), as well, this can be set by toggling the parameter deisotope reporter region to true. It is possible to set a tolerance value (in Da or mmu), controlling how strict the algorithm will behave when comparing a calculated distance to the expected distance of an isotope peak. Furthermore, the deisotoping can be done by using averagine modeling. I.e. the peaks of the detected isotopic clusters are compared against the isotopic distribution of a poly-averagine of the same mass as the peptide to which the isotopic cluster belongs. A more detailed description of the parameters that can be set there will follow soon...
Charge-Deconvolution
In order to facilitate the protein identification process, the spectra can be deconvolved to charge state 1. Every peak that has a charge state greater than 1 will be removed from the spectrum and replaced by a peak at the corresponding singly-charged m/z-position with the same intensity. Note that the algorithm only works on peaks having charge state information available.
The Deisotoping algorithm adds charge state information to the remaining monoisotopic peaks. Thus, unless you are sure that the peaks in the MS2-spectra are annotated with their charge states, we recommend using Charge Deconvolution in combination with Deisotoping.
MS1-Precursor Recalculation
The algorithm reconstructs the elution profile of the peptide and uses the gathered data to calculate a more precise value of the mass. The default settings are the recommended settings that were evaluated experimentally, however a more detailed description will follow soon... 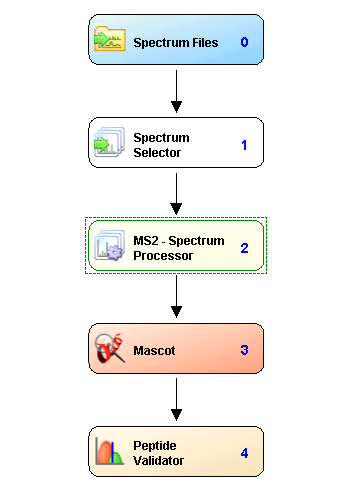 We analysed the performance of the MS2-Spectrum Processor node for two HCD HeLa samples (both 1 μg) which were run on a QExactive and a Velos Orbitrap.
The following chart shows a comparison in the obtained results regarding the Peptide Spectrum Matches (PSMs) and the Peptide Identifications at 1% FDR. 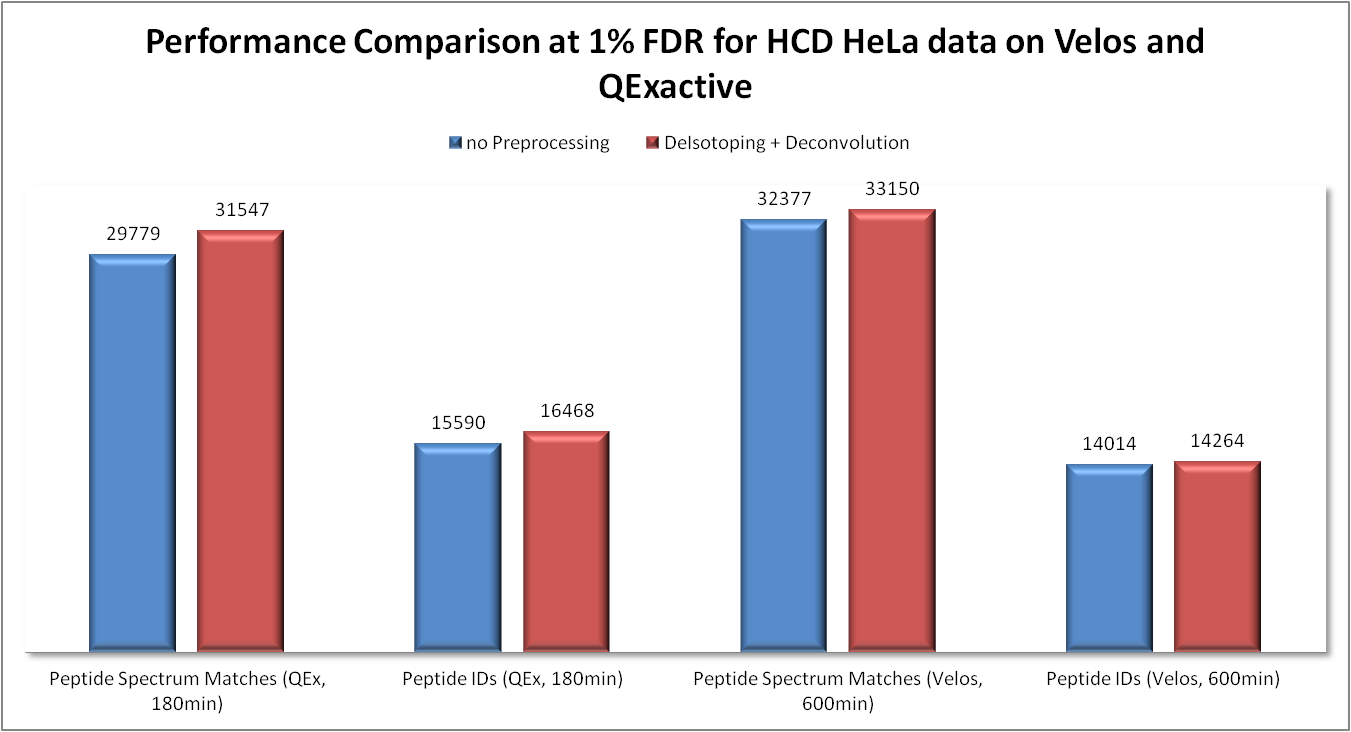 The resulting .msf-files generated by Thermo Scientific Proteome Discoverer can be downloaded here:

In the following table the corresponding filter settings that were used in Proteome Discoverer to achieve the 1% FDR for PSMs, as well as Peptide Identifications are listed:

For Proteome Discoverer 2.1 use the installer.